Ready to get competitive? Let me take you through the essentials that you must know to combat all those "aim heroes" that always seem to get you first.

#1 Don’t panic and play at your own pace

Many new players tend to try and play at a faster speed than what they are capable of. The phrase “slow is smooth, smooth is fast,” applies directly to FPS titles. If you can smoothly move your crosshairs onto an opponent and smoothly track their hitbox you will gain the expertise needed for agility over time.

Flailing your crosshairs around when becoming overwhelmed is never a good thing, yet it is more common than you would expect with new players. Even experienced players when pressured enough can see their accuracy drop to levels lower than their normal play.

Your goal should be to try not to get overwhelmed. Take your time, stay calm during engagements, and focus on playing smoothly.

Speed really comes with time and will be a natural product of practicing and playing regularly. However you can greatly inhibit your progress if you are continually trying to play faster than what you are capable of.

Another bi-product of rushing all the time, is that you don't give yourself the space for making good decisions and playing smart. Even if it means you’ll be losing gunfights while learning, it is better to focus on being smooth and making the right choices during an engagement, versus rushing and making bad decisions consistently.

#2 Stop sprinting all the time

For shooters that have a sprint mechanic, you neeed to understand that the time between sprinting and having your gun up and ready to fire, is longer than if you were just in a ready-state to begin with. Coming out of sprint takes some additional animation frames.

Often times new players will sprint around corners and back into engagements without realizing just how much time they are missing out on due to the extra animation frames that their player model is locked into.

Sprint with a purpose, and by that I mean, use sprint to get to places on the map intentionally. Don’t just sprint for sprinting’s sake.

It’s important to remember that this tip doesn’t only apply to games that have a sprint mechanic. Any FPS that has animations that limit your ability to fire or have your weapon in its ready state should be things that you as a player are very aware of. A gun down is a missed opportunity.

So if you are continually reloading after every other shot, this can lead to you getting into a situation where an opponent pushes you while you are locked into the reload animation. Some games let you switch weapon cancel out of these animations but they always come at the consequence of lost time. At higher levels of play, every second counts so be very aware this and be cautious of when rounding corners or engaging in abilities that lock up your gun’s ability to be in a ready-state.

Be careful of lengthy "Aim Down Sight" weapon animations while sprinting. Long ADS time prevent you from firing your weapon when you need to.

Many new players make the mistake of consistently returning to the position where they last were killed only to meet experienced players that recognize this and begin anticipating it.

Being unpredictable with your movement is crucial. Strong positioning can win far more gunfights than solely focusing on accuracy alone.

This tip also extends to Battle Royale modes as well. When you watch experienced BR players, notice how they flank and reposition constantly to make sure they have the upper hand during engagements. They don’t continue to fight in the same spot during a battle for minutes on end. They are setting flanks and making sure to rotate in an attempt to surprise the enemy and have a positional advantage over them. 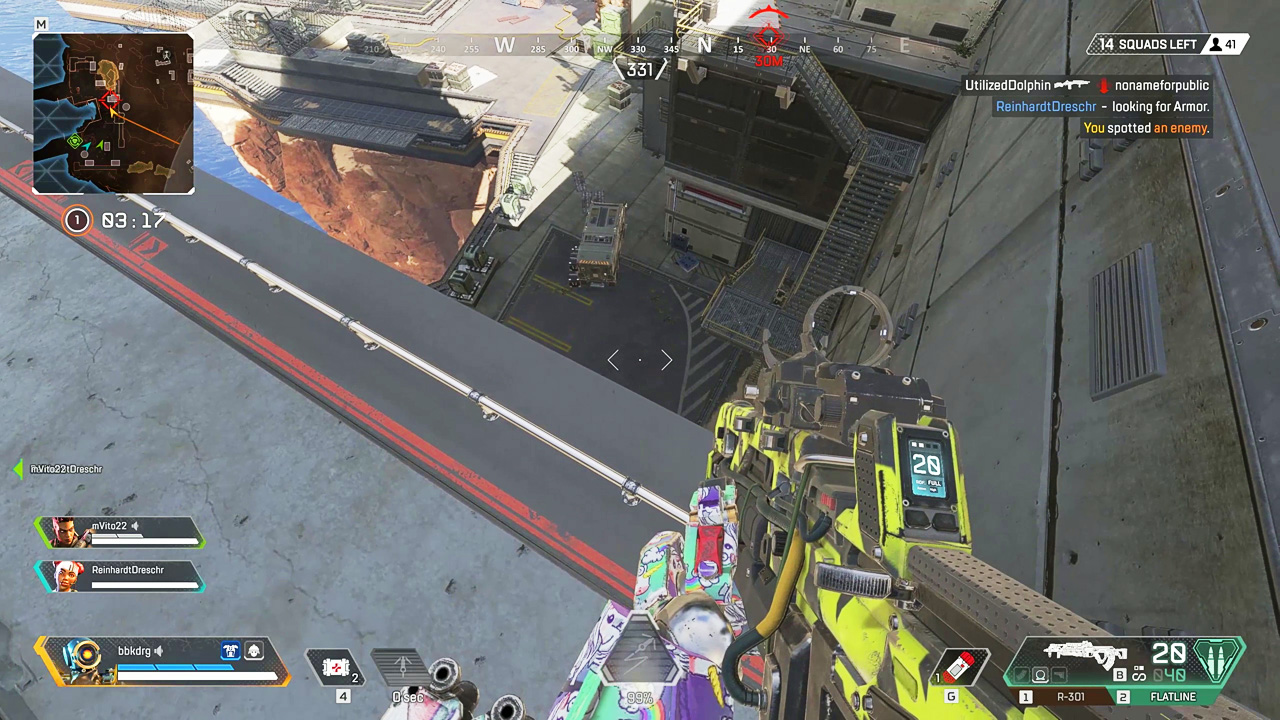 Utilize height to your advantage.

Height plays a large role in FPS titles as it offers the player a massive advantage on their opponent. If you have the height advantage in a gunfight, do not give it up unless you are positive that you can finish the engagement successfully. It is much harder to shoot up towards an opponent who can simply walk backwards to regain cover and pop out again in far more places than the player on the lowground.

Be very aware of your position during engagements and don’t be afraid to reposition and flank consistently to provide yourself with a further advantage during a gunfight. Smart positioning is also about capitalizing on takedowns. Experienced Battle Royale players don’t let a down go to waste. They push up on the enemy, collapsing in on their opponents, and overwhelm them whenever an advantage (like a takedown) is secured. Try to do the same in your own gameplay.

#4 Do not push forward in a straight line

New players tend to try and “close the distance” between them and their opponent during gunfights. This is even more prevalent in FPS titles that have a melee mechanic like Halo.

When you push towards your enemy in a straight line during a gunfight you inherently give your opponent the easiest engagement of all time.

They don’t have to move their crosshairs at all if you are pushing towards them directly. However when you strafe in a fight, it forces the opponent to have to snap and track to your hitbox in order to secure hits.

The new player tendency to “close the gap,” is usually to make tough-to-hit shots a bit easier, as newer players don’t have a great deal of confidence in their accuracy.

Additionally melee mechanics like in Halo feel good to novice players as they offer a fairly easy way to push a decent amount of damage onto your opponent. Experienced players will recognize this playstyle and will bait it out. Be focused on strafing in your gunfights. Moving left and right unpredictably will cause your opponent to have to work much harder at landing their shots, and give you more time within the engagement to focus on winning the fight.

#5 Keep your crosshairs at head and chest height

It sounds simple but if you regularly aim where you think the enemy will be, you’ll find more often than not, that you get to land your first shots before the opponent does. This kind of crosshair placement is also sometimes referred to as pre-aim which is incredibly important in a game like CS:GO.

Newer FPS players crosshair placement is almost always too low. Often you will see players aiming at the ground to get their weapon’s viewmodel out of the way and as soon as an opponent appears it requires a lot more crosshair movement to “snap to target”.

The goal should be to keep your crosshair aimed at chest or head height, or at least positioned in a way that minimize the time it takes to snap to target. As mentioned earlier, every second counts in a gunfight and newer players tend not to have the best accuracy to begin with, let alone for flickshots.

Keep your aim at chest height to quickly snap onto your target when turning around a corner.

So alleviate those pressurses by consistently reminding yourself to keep your gun up and aimed where you think an opponent could be.

A great way to fix this habit is to record your gameplay back and watch it regularly. On PC there are plenty of great free recording options, and most consoles now have the ability to stream or record in some fashion.

Recording your gameplay back and watching your crosshair placement closely can help identify aiming mistakes far faster than just grinding out a large bulk of matches. Streamers and YouTubers often times improve very quickly at games because of this.

When you are removed from the match and can critically analyze your gameplay, the amount of refinement that can occur to your gameplay is huge. If you are utilizing a precision weapon like a sniper rifle, it is even more crucial to keep your crosshair placement up and ready where you think an opponent can be. This in turn will naturally help your positioning and decision making.

Set small goals for yourself and work towards them consistently.

I'll close off with a bonus tip: Discover your optimal sensitivity and you can use Aim Master to do just that.

Select your main game on the configuration screen and use the 60 second shooting gallery to gage whether your sensitivity is too high or too low.

If you consistently overshoot your target to the left and right of the bullseye, it's a good indication that your sensitivity is too high. Try adjusting it down slightly and play another round until you find that sweetspot of getting targets quickly and hitting the bullseye.

If your score is low, it's an indicator that your sensitivity might be too slow: It's simply taking you too long to get to the target.

Remember most of all to have fun and enjoy the process of learning and improving. If you ever feel yourself getting tilted make sure to take a short 5-10 minute break. A few minutes away from the keyboard or controller can do your mental state a world of difference and can help you avoid large loss streaks influenced by emotion.

If you want to talk more about how to improve your aim, join the community in #aim-master on Discord or feel free to reach out to me, BBKDRAGOON, on any of the social platforms below: