What is The International?

The International (or TI, for short) is the Super Bowl of Dota 2, a game about controlling little wizard people and knocking over buildings. It's fast paced like soccer, calculated like chess, and there’s an obscene amount of money on the line (see our tips for getting into playing or watching Dota).

TI has been the culmination of the Dota 2 competitive season since it began in 2011. For fans, this tournament sees players from their favorite teams in a knockdown drag out fight to see who can claim the title of best in the world. For everyone else, it’s that video game that makes the news every year because the prize pool is so impossibly huge.

The first International tournament took place in Cologne, Germany in 2011 and was put on by the developers behind Dota 2: Valve Corporation. The tournament coincided with the public reveal of Dota 2, the highly anticipated sequel to the original DotA. The International was a historic moment in the legitimizing of esports. Most video game tournaments to date offered prize pools in the hundreds or thousands of dollars, but that wasn’t good enough for Valve. The prize pool for 2011’s TI was set at $1.6 million. In subsequent years, the tournament and its prize pool would only grow.

In 2013 Valve experimented with crowdfunding the prize pool for TI. The developer offered a purchasable digital compendium (now called a “Battle Pass”) which allowed fans to track the tournament and get rewards like digital cosmetics. Twenty-five percent of each transaction went towards the prize pool. Year after year the in-game bonuses offered by the compendiums grew, along with the prize pools for TI. Since 2014, The International has consistently broken its own records for the largest prize pool of any esports event in history. This year’s upcoming prize pool has already exceeded $20 million. That’s a lot of hats. 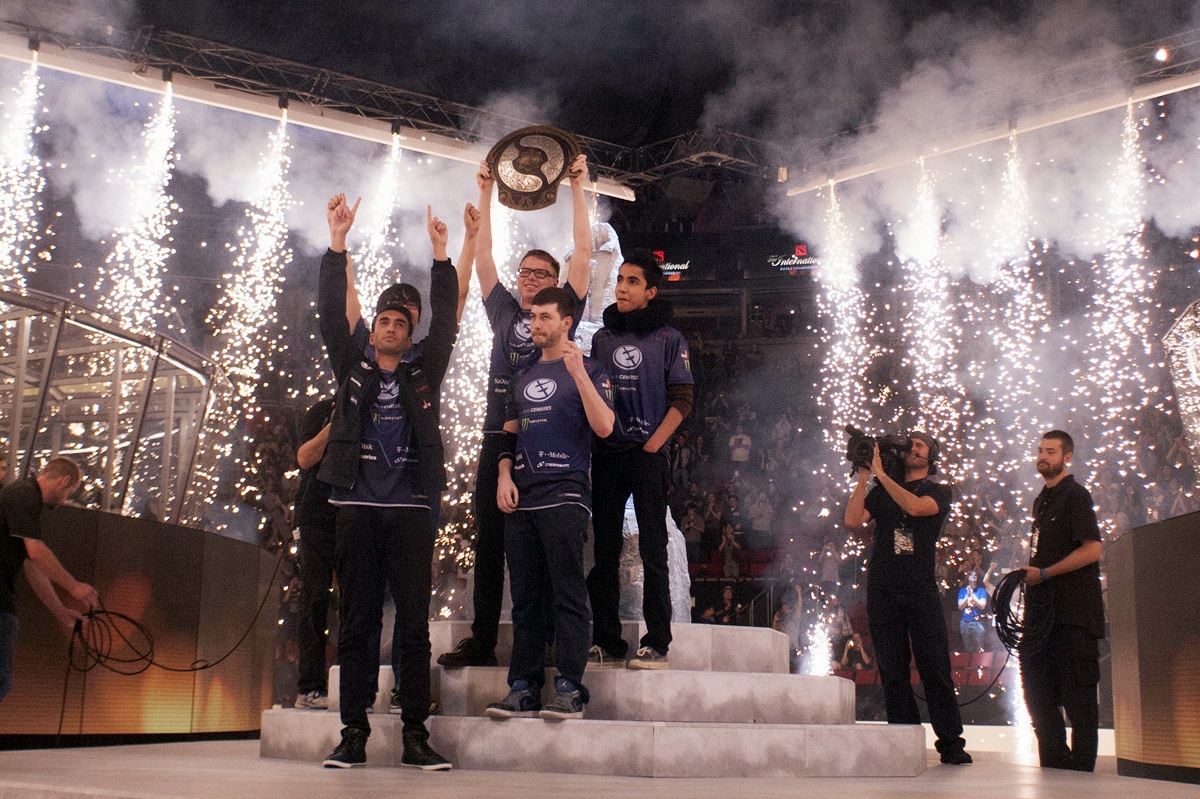 To date, Valve still only seeds the TI prize pool with $1.6 million. That means that for last year’s International in 2016, fans contributed $19.170.460 for a total prize pool of $20.770.460. These figures are staggering considering that only 25% of each Battle Pass transaction goes towards TI. Therefore, players spent $76 million on the 2016 Battle Pass, and have already spent more this year. 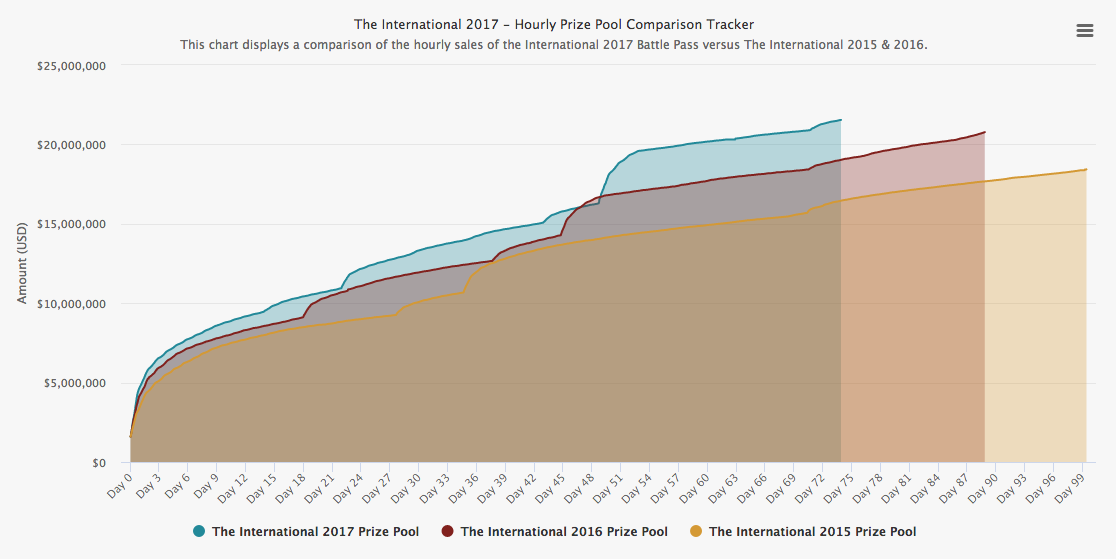 This year's prize pool is at $23 million and counting

There are only a handful of traditional sports that still offer prize pools larger than the Dota 2 International. Most notable among them are Soccer’s UEFA Champions League, Formula One, the World Series, and Wimbledon. Even the Super Bowl is dwarfed by The International. The winning NFL team only takes home $11 million.

In the world of esports, the only tournament that has come close in total prize pool to TI is the League of Legends 2016 World Championship, which offered $5 million. League of Legends recently adopted a similar tactic of contributing to the total winnings by crowdfunding with in-game items. With 100 million players (around 7 or 8 times more than Dota), League of Legends is certainly looking to follow in Dota’s crowdfunded footsteps. 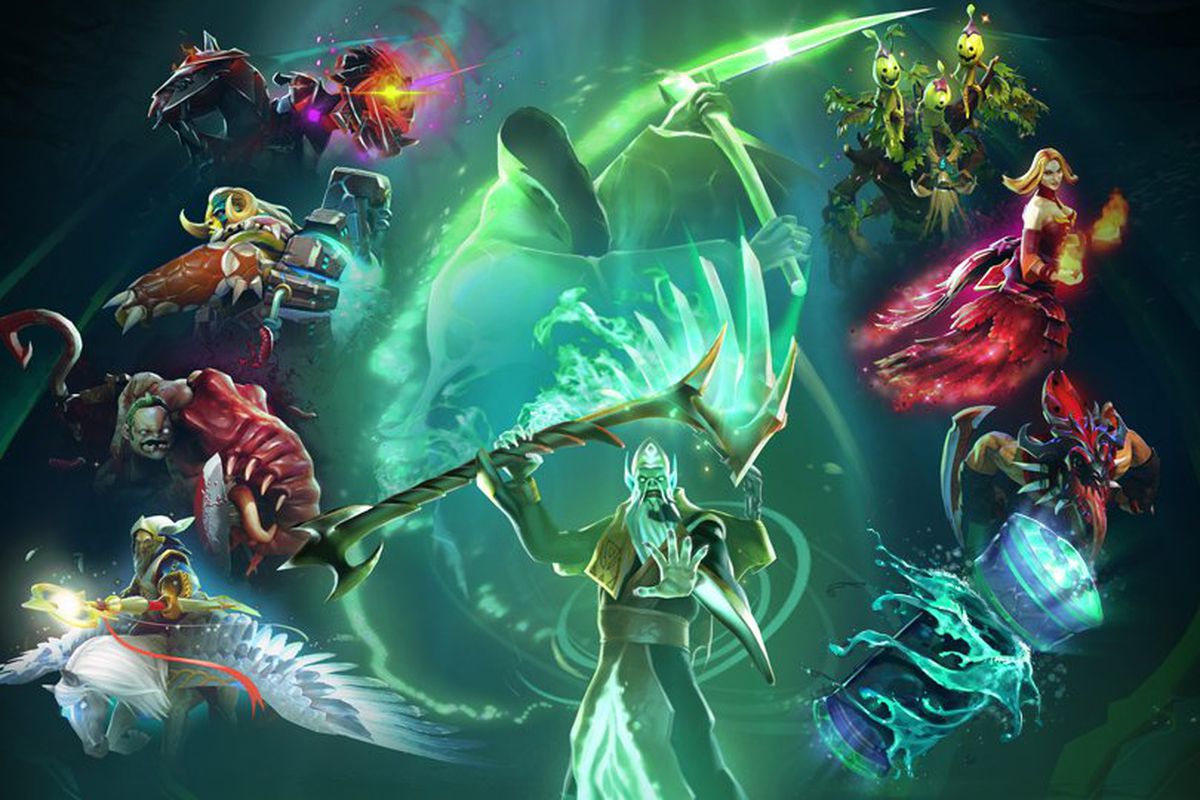 So what has this growth in the TI prize pool done for Dota 2’s professional players? Well, TI and their major tournaments have made them very, very rich: 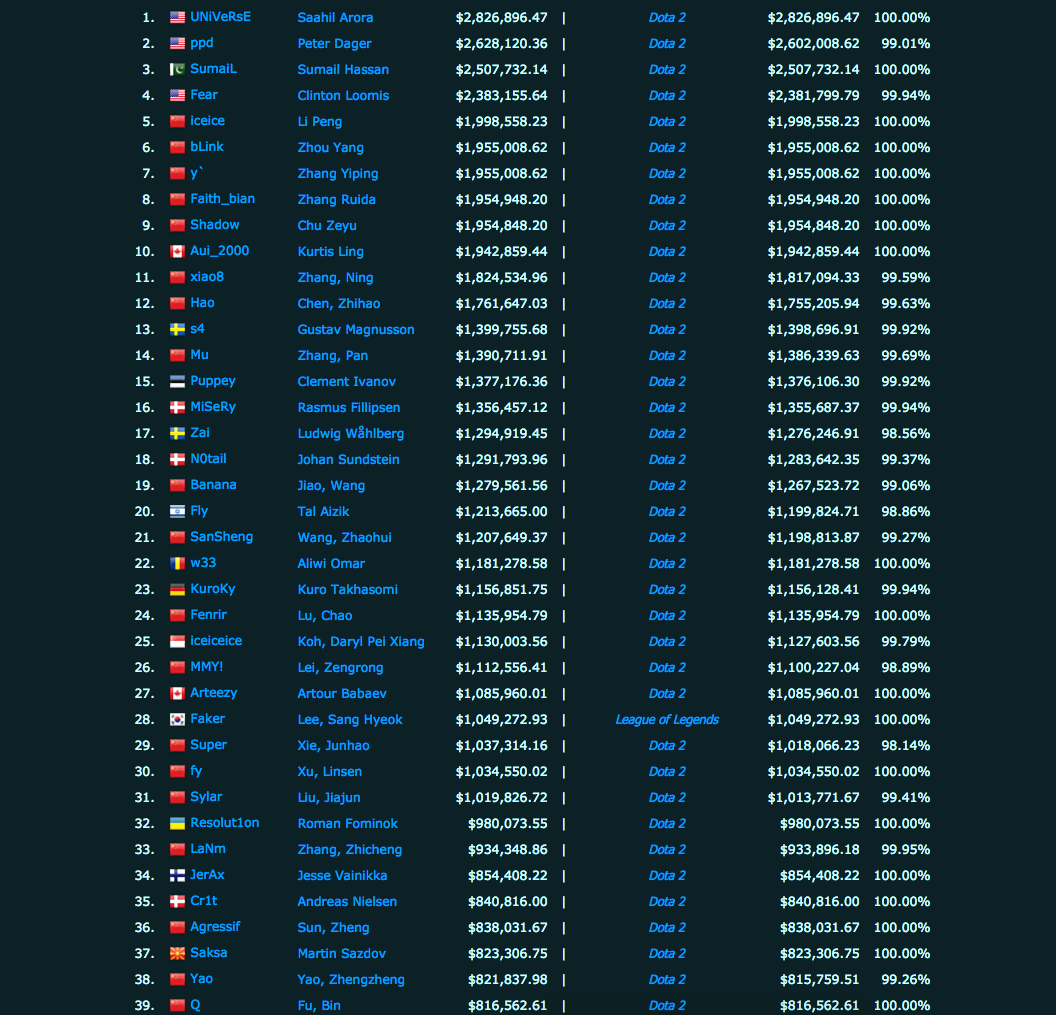 Most of the highest earning players in esports are from Dota 2.

Outside of four League of Legends pros, the top 63 earners are Dota 2 players. (It’s important to keep in mind that these figures are all based on tournament winnings, and exclude sponsorships, salaries, and other sources of income). If you look at the highest paying games, the numbers are still incredibly skewed towards Dota 2. For example, Counter-Strike: Global Offensive’s top earning pro, Neo, has earned over $600.000 in tournament winnings - that’s only a quarter of what Dota 2’s UNiVeRse has earned in a third of the tournaments.

Though many other esports are offering larger and larger prizes every year, they still pale in comparison to the behemoth that is The Dota 2 International. Just qualifying for TI can mean big money. Even the last place teams at TI6 (13th to 16th) took home $103.852 each. With so much riding on the line, even one right or wrong mouse click can mean millions:

"IT'S A DISASTAH": UNiVeRse secures a match that wins his team $6 million.

No other video game has those stakes. As long as fans continue to support Dota 2, professional players, and The International as a whole, the massive prize pools will likely remain. The expansion of esports in the last two decades has been astronomical, and its future growth and success are almost impossible to predict.

Is it sustainable? Who knows. But in the meantime, Dota 2 and The International are turning its best players into millionaires.